Baptism – Regeneration, Symbolic, Not At All or What About This Way?

How can their be several conflicting views when there is only one TRUTH of the way baptism should be? All options cannot be true when they are in conflict with each other. 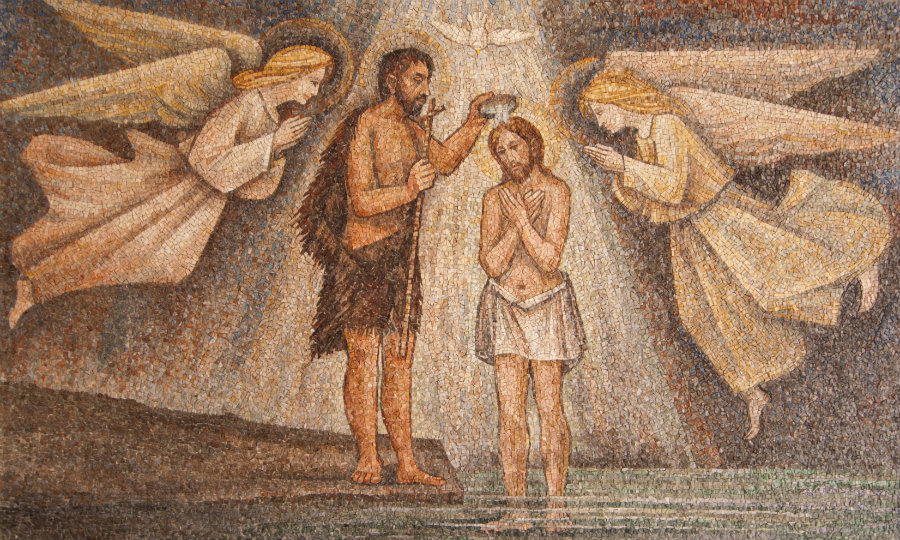 NOTE: Before going any further, I'm not getting into the argument that baptism being necessary for salvation is a work which makes any view that baptism is something we have to do become a works based salvation. If you want to go out on that limb which can easily be refuted, I can go on to say that you have to repent and turn to Christ for salvation which are both WORKS: Repent ( action ) and Turn ( action ). Christ said take up your cross and follow me: Take Up ( action ) and Follow ( action). So let's not go there in this article.

Catholicism teaches that the initial work of salvation is by God's grace through what Christ did on the cross by having faith ( not Faith Alone ) in Christ through repentance. But, yes, baptism is a part of becoming a Christian.

Catholic View: "It ( Baptism ) is necessary for salvation." Baptism is more than mere symbolism. In Catholicism, baptism is not optional. To be in full communion with the Catholic Church one must be baptized in the name of the Father, the Son and the Holy Spirit, but the Catholic Church recognizes many other Christian faiths baptism.

BUT WAIT A MINUTE - What about the thief on the cross?

The thief on the cross is ALLEGED proof that Baptism is not necessary for salvation ( and even about faith alone which I will not go into in this article ), but consider the following:

1) We don't know if the thief on the cross may have been baptized at some point in his life: There is no Biblical proof.

2) Jesus had not rose from the dead yet. If Jesus had not have risen after His crucifixion, I would never have written this article. In other words, Christ coming was not completely fulfilled until His resurrection. So what applied and didn't apply before His resurrection and ascension? It's something to think about. Although I can see the argument already that baptisms were taking place before Christ death, I still challenge you to consider when the fulfillment of the ministry of Christ was truly fulfilled.

3) Would you agree that Jesus has more authority than any human? So couldn't Christ make exceptions in extreme cases like a dying man on a cross? Are their any exceptions in the Bible? Virgin Birth? Enoch and Elijah being taken up into heaven? I'm just trying to get you to think beyond the thief on the cross proves baptism is not necessary.

4) From an article on EWTN, if baptism by water is impossible, it may be replaced by the baptism of desire, or by the baptism of blood, as in the case of those who suffer martyrdom for the faith of Christ. Also, paragraph 1259 of the Catholic Church Catechism states: “For catechumens who die before their Baptism, their explicit desire to receive it, together with repentance for their sins, and charity, assures them the salvation that they were not able to receive through the sacrament”

5) Here's something that I found on a forum: Augustine’s conjecture that the thief was already a baptized follower of Christ prior to his crucifixion has a lot of merit. If he didn’t already know Jesus, how could he be convinced that Jesus “had done nothing wrong” (Luke 22:41)? And how could he know that Jesus, being crucified, would thereby enter into a kingdom (cf. Luke 22:42)? And how could he think anything but that the accusations against Him were true, that Jesus really had threatened to destroy the temple and was simply a blasphemer claiming to be God (cf. Matthew 26:40; John 19:7)?

A few other churches that appear to believe baptism is more than symbolic but may or may not take the strong view of the Catholic Church are listed below. I encourage you to research further ( see source ):

Churches of Christ: They too view baptism as granting repentance and salvation.

I have found that the Church of Christ is one of many bodies of Christians that operate independently and I do believe that it is possible some could take a much more radical stance than others meaning that Baptism has to be done in the Church of Christ. I don't believe that's the view across local bodies though. It's interesting that in his wife's search for a Church of Christ that she needed to find one which lined up with how she felt and believed ( at least from what I gathered from what he shared ).

My wife and I chose a Baptist Church that we liked the music and the preacher and didn't worry about much else because we knew basic Baptist beliefs. So I get the protestant mentality of finding a church.

This Catholic man also went on to say that he has asked what if someone is dying in the desert with no water and needs to be baptized. Based on the response that he received, I take it that the view is the person will be lost without water baptism.

The seemingly hard stance on the desert example above is one of many reasons that I like the Catholic approach of baptism by desire or by blood both of which make logical since. For example, if someone is dying in the desert with no water to be baptized with, that their desire to be baptized is something that God knows.

I also feel the Catholic approach to many areas that I've been confused about as a lifelong Christian allows room for God's mercy and that in the end it's up to God. He knows the heart and the true intent of the person. God also knows what someone does in there last breath or thought even if they appear incoherent to us on a hospital bed.

Do you believe that no matter how your human judgement and interpretation on the things of God are that at the end of the day God is the JUDGE and final decision maker not us mere humans?

The following may go deeper than a Baptist view but not as deep as a Catholic view:

Anglicans: Their philosophy is that baptism is for the cleansing of sins or original sin, rebirth, and entry into the denomination and the body of Christ through God’s grace. Note: Do more of your own research.

Lutherans: Their philosophy is that baptism is sacramental and grants eternal salvation. Note: Do more of your own research.

Baptism Is Symbolic - It's NOT necessary for salvation, but it should be done in obedience to the command of Christ:

Although some may hold to refusing to being baptized is a sin because Christ commanded baptism, the majority of the protestant side of Christianity do NOT teach the necessity of baptism for salvation.

This is direct from the Southern Baptist Convention website:
Christian baptism is the immersion of a believer in water. …It is an act of obedience symbolizing the believer's faith in a crucified, buried, and risen Saviour, the believer's death to sin, the burial of the old life, and the resurrection to walk in newness of life in Christ Jesus.

I found this view of a conclusion about Baptism:
Baptism is only a symbol of being a follower of Jesus. Baptism is not required for salvation! It is commanded by our Lord and our first act of obedience as Christians should be baptism. The thief on the cross who was hanging next to Jesus was never baptized. Baptism is not essential for salvation. ( Note: I addressed the thief on the cross earlier before I even found this example. )

Salvation Army Doesn't Baptize At All

Well did you know?
The Salvation Army, an international movement, is an evangelical part of the universal Christian church. Its message is based on the Bible. Its ministry is motivated by the love of God. Its mission is to preach the gospel of Jesus Christ and to meet human needs in His name without discrimination.

Direct from the source (UK):

"Some Bible scholars had pointed out that there was no scriptural basis for regarding the sacraments as essential to salvation or Christian living. Many Christians assumed that Jesus commanded the use of baptism and holy communion. But there are very few New Testament references to these practices and it was argued that none of them showed any intention by Jesus that they (or any other practice) should have become fixed ceremonies."

Oneness Pentecostals - Baptize in the name of Jesus Christ

About the Gospel: "The saving gospel is the good news that Jesus died for our sins, was buried, and rose again. We obey the gospel (II Thessalonians 1:8; I Peter 4:17) by repentance (death to sin), water baptism in the name of Jesus Christ (burial), and the baptism of the Holy Spirit with the initial sign of speaking in tongues as the Spirit gives the utterance (resurrection). (See I Corinthians 15:1-4; Acts 2:4, 37-39; Romans 6:3-4.)"