Back in 2009, I met fairly regular with a Christian friend for coffee. We've remained connected on LinkedIn for years.

Via LinkedIn messaging, on October 22nd, 2018, he wrote "David, when did you convert to Catholicism?" and I replied back "Started attending Catholic services January 2017. Both Brenda and I became Catholic Easter Vigil 2018" and he wrote back "Wow. That is a huge commitment. Would love to hear about the 'process' some day." Well, on Veteran's Day 2018 ( November 12th ), we met for coffee and did some catching up.

So once we got around to the Catholic part of the conversation, he listened to my story and then brought up some things about Catholicism that I'll share below:

1st - No Salvation Outside The Holy Roman Catholic Church 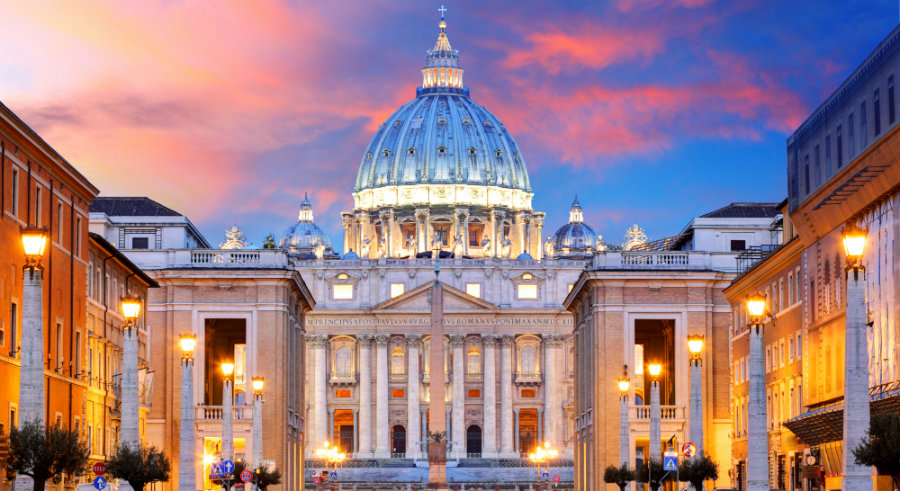 Just before paragraph 846 of the Catechism of the Catholic Church, you'll find the words:

"Outside the Church there is no salvation"

If someone stops at those words ( it seems like many do ), it can and does create friction. However, the thing that Catholicism has taught me is that it almost always without exception goes beyond just one statement like the one above that can be pulled out of context to create and issue between Catholics and non-Catholics.

846 How are we to understand this affirmation, often repeated by the Church Fathers? Re-formulated positively, it means that all salvation comes from Christ the Head through the Church which is his Body:

Basing itself on Scripture and Tradition, the Council teaches that the Church, a pilgrim now on earth, is necessary for salvation: the one Christ is the mediator and the way of salvation; he is present to us in his body which is the Church. He himself explicitly asserted the necessity of faith and Baptism, and thereby affirmed at the same time the necessity of the Church which men enter through Baptism as through a door. Hence they could not be saved who, knowing that the Catholic Church was founded as necessary by God through Christ, would refuse either to enter it or to remain in it.

847 This affirmation is not aimed at those who, through no fault of their own, do not know Christ and his Church:

Those who, through no fault of their own, do not know the Gospel of Christ or his Church, but who nevertheless seek God with a sincere heart, and, moved by grace, try in their actions to do his will as they know it through the dictates of their conscience - those too may achieve eternal salvation.

Stick with me before you stop reading.....

For me, David Williams, I NEVER even considered becoming a Catholic before late 2016. Even then, I was simply open to learning more. I did not make a firm verbal decision to my wife that I would enter the Catholic Church until around November of 2017.

I wanted to TRULY understand everything that I could about what the Church taught and believed. Now, I have a deeper understanding.

I do believe in ONE, HOLY, CATHOLIC and APOSTOLIC CHURCH. However, I cannot force others to see what I see. I only discovered it through diligence and prayer. The point came when I could not reject something that I believed to be the truth.

I do believe that I am more culpable to God for the knowledge that I now have and what I now believe to be true. However, I also believe there are other brothers and sisters in Christ that do not see the Catholic Church as the Church teaches about herself and it's through no fault of their own just like it was for me before I ever considered the Catholic Church.

I believe that we are each, individually, held accountable to God for what we truly know and believe in our heart: James 4:17 "Whoever knows what is right to do and fails to do it, for him it is sin."

I don't feel trapped by the Catholic Church. I love being a Catholic Christian. I love the new found knowledge that I discovered through my own in depth digging and not through someone twisting my arm to become Catholic.

2nd - Infallibility of the Pope - This current Pope says a lot of stuff.

The infallibility of the Pope does NOT mean that every word that comes out of the Pope's mouth is infallible.

The following snippet is from the Catechism. I have bolded a few CRITICAL words.

891 "The Roman Pontiff, head of the college of bishops, enjoys this infallibility in virtue of his office, when, as supreme pastor and teacher of all the faithful - who confirms his brethren in the faith he proclaims by a definitive act a doctrine pertaining to faith or morals......................

So it's NOT everything the Pope says, it's when the Pope proclaims by a definitive act a doctrine pertaining to faith or morals.

This is from an article on EWTN.com:

".....When the Pope (1) intends to teach (2) by virtue of his supreme authority (3) on a matter of faith and morals (4) to the whole Church, he is preserved by the Holy Spirit from error. His teaching act is therefore called "infallible" and the teaching which he articulates is termed "irreformable"....."

Papal Infallibility is referred to as EX CATHEDRA which is to say "with the full authority of office (especially of the Pope's infallibility as defined in Roman Catholic doctrine)."

So how often does this happen?

".....There is no set list of ex cathedra teachings, but that’s because there are only two, and both are about Mary: her Immaculate Conception (declared by Pope Pius IX in 1854 and grandfathered in after the First Vatican Council’s declaration of papal infallibility in 1870) and her bodily Assumption into heaven (declared by Pope Pius XII in 1950)......"

In other words, when the Pope says something to the media that the media, non-Catholics and even Catholics go on and on about, the Pope is not speaking EX CATHEDRA.

The Pope goes to confession. The Pope is NOT sinless. Infallibility of the Pope, like many things in Catholicism, is often misunderstood. I see it over and over.

3rd - Elevating people to Sainthood. We are all saints according to the Bible.

I started out as a Pentecostal and I have heard SAINTS OF GOD many times referring to Christians. Paul speaks of Christians as saints in the New Testament.

This is from Catholic.com:

".....According to Paul, the saints on Earth possess in part what the saints in heaven possess in fullness. Thus, it is fitting that the Catholic Church reserves the title of saint to those it has declared to be in heaven. They alone (the saints in heaven) possess sainthood, if you will, in its fullness. They have reached the destination that we saints on Earth—holy ones by virtue of the graces God gives us for the journey—are in hope striving to reach....."

828 By canonizing some of the faithful, i.e., by solemnly proclaiming that they practiced heroic virtue and lived in fidelity to God's grace, the Church recognizes the power of the Spirit of holiness within her and sustains the hope of believers by proposing the saints to them as models and intercessors. "The saints have always been the source and origin of renewal in the most difficult moments in the Church's history."Indeed, "holiness is the hidden source and infallible measure of her apostolic activity and missionary zeal."

My Grandfather, who passed away in 1998, was a Godly man. He was a Deacon and faithful to Christ. I never heard a foul word out of his mouth and I'm almost positive that he never took a drink of alcohol. There are many things about him that cause me to look up to him in his Christian walk. He was not a Catholic. He will never be canonized by the Catholic Church, but that doesn't mean that I cannot be inspired by the life he lived.

When I look at many of those who have been canonized as Saints by the Catholic Church, they are men and women who lived extraordinary lives for the Christian faith. Many of them died because of their stand for Christ. I am inspired by many of the lives of the Saints. I think there is a lot that those of us trying to be disciples of Christ can learn from those who have gone before us and especially many of those considered saints.

Here are two key inspirations for me and there are many more:

This prayer from Saint Alphonse Ligouori:

"My Lord, set me on fire with love for you. Let me think of nothing, crave for nothing, yearn for nothing, search for nothing but you. How I wish to be caught up in this scorching fire of love! How I wish it would consume every obstacle that blocks my path toward you! Make my love for you grown stronger each day of my life."

I recently repeated the prayer above with tears flowing down my cheeks.

A quick comment about the Crucifix on my t-shirt that we didn't go into detail about.

My Baptist friend noticed my t-shirt with a crucifix embedded in Catholic Transformation as you will see here on the website. He said that we serve a risen savior and I know that he knows that I believe that. However, for me, Christ on the Cross via a visible sign ( crucifix ) reminds me of what Christ did for me on the cross. Christ paid the ultimate price.

My wife and I do not have an issue with the crucifix. We never have. That was not something we had to overcome. We know Christ rose from the dead, ascended to heaven and is seated at the right hand of God the Father. But there is something about the crucifix as a reminder of how JESUS PAID IT ALL - ALL TO HIM I OWE that an empty cross just does not bring to mind. Yes, I know we serve a risen SAVIOR. Again, I know my Baptist friend has no doubt that I believe that.

My Baptist friend and I had a pleasant conversation. I did not question his relationship with Christ and he didn't question mine. Neither of us have any doubt that we serve the same Jesus Christ that shed His blood for the sins of the world. We both feel that the other is heaven bound.

Until Christians can stop pointing fingers and start having loving conversations about the Christian faith, we are not going to be able to accomplish as much for God as a Christian community as we should. I believe that those Christians who are judging and out right hateful to others like those who say the Catholic Church is the WHORE OF BABYLON will have to answer for that on judgment day.

I am proud of my Protestant background, but I am also very happy to be a Catholic Christian. My wife and I are truly at home in the Catholic Church.