Why I Am Catholic? The Bible, History, Logic, The Teachings 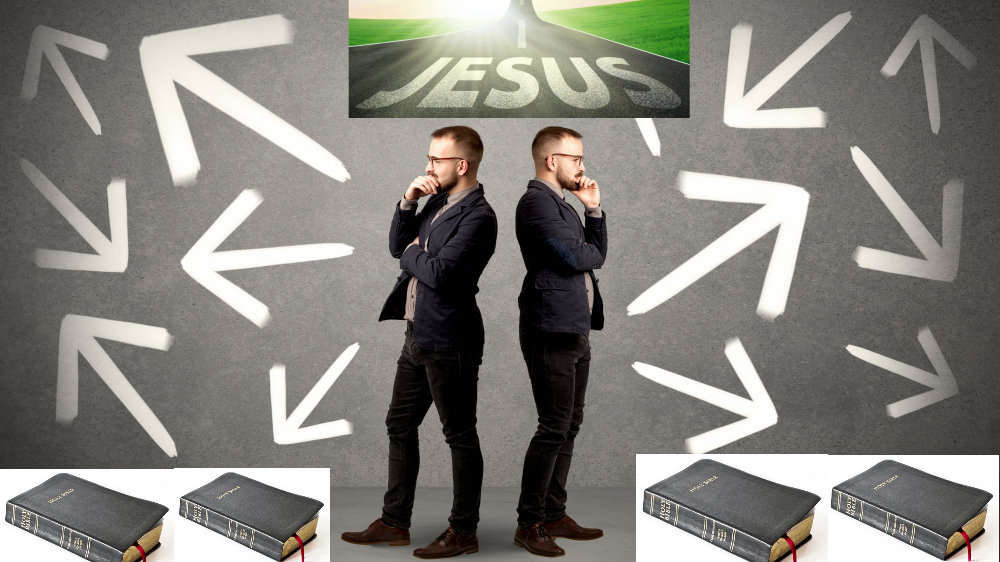 It's important to share some other insights before I get back to the title of this article.

The image above kinda, sorta, reflects what I see regularly online and especially recently as I've been seeing more finger point among non-Catholic Christians toward each other.

What's interesting is that ALL well meaning, faithful Christians who love Jesus  and want to be in heaven for eternity with Him cannot completely agree on what the word of God says. That within itself is interesting because we are all using the same book except for the Catholic Bible having 7 more books in the Old Testament that were in there before the revolters ( not reformers ) took them out in the 1500's, but that's another story.

This advice to a new Christian always gets me:  "We recommend you read your Bible faithfully every day. Start reading God's Word - and get a great Study Bible if you can to help you understand the meaning of the scriptures..." - "Find a good, Bible-believing Church that teaches God’s Word..." - Let's see Seventh Day Adventist, Jehovah's Witness, The Church of Jesus Christ of Latter Day Saints, Southern Baptist, Free Will Baptist, Church of Christ, Presbyterian, Methodist, Lutheran, Church of God, Assemblies of God and the non-denominational Church that meets at the school on the weekend all use the Bible. Oh, and maybe to the surprise of many, even Catholics use the Bible and read it. And personally, I believe that the Catholic Church is a good Bible believing Church, but the site that listed this would likely not agree based on what they have posted about Catholicism.

So if a new Christian starts reading the Bible, what conclusions will he or she come to? The answers is a lot of confusing ones. Then, when he or she starts asking questions, the slant of the individual answering the question will be based on one of two things what Church he or she attends or in a lot of cases, their own personal interpretation of scripture that may not even be in agreement with the Church they attend. I've been there as a former Southern Baptist who never believed in once saved always saved.

Is it simple?
It's partially true what my father recently said ( paraphrasing ) "It's so simple. Christ on the Cross. I don't know why people complicate it." Although I do agree with Christ on the Cross and Christ is the only way to God, I don't agree with anyone who says walking with Christ is simple. Jesus said in Matthew 16:24 "...If any man would come after me, let him deny himself and take up his cross and follow me." Taking up our cross and following Christ is not simple. Did Paul have a simple life as he wrote from prison? Did Peter have it made when he was crucified upside down? Did John the Baptist losing his head have it simple? Did Jesus have it made during his 3 years of ministry and His death on the cross? Although the message of Christ is simple, walking with Christ does not guarantee us a life without problems, but walking with Christ does give us hope of eternity in heaven. I say hope because I have never believed in once saved always saved. Also, don't get me wrong. I don't believe my father meant our life is simple because we follow Christ. I believe he was really saying more about all the deep theological debates people get into and bringing it all back to the message of Christ on the cross.

If we walk with Christ, we must DO!
Contrary to what others might think based own their fallible interpretation of scripture, we are commanded to DO! Jesus said in John 14:15 "If you love me, you will keep my commandments." Keeping the commandments of Christ means we have to live out our faith through actions. James 2:24 says, "You see that a man is justified by works and not by faith alone." That looks like a conflict of Paul's writing Ephesians 2:8-9 ( the counter argument ) "For by grace you have been saved through faith; and this is not your own doing, it is the gift of God— not because of works, lest any man should boast." However, when one studies the word of God in context based on proper interpretation ( magisterium and history ), it's not all that hard to see that we are not to sit on our butts being lazy Christians.

False Prophet...False Teacher...The Wrong Way
Take Catholicism out of the equation for a moment. I've come across YouTube videos recently of other non-Catholic Christians pointing fingers at other professing Christians and in some cases Pastor vs. Pastor making statements like false prophet. In one particular case, I would consider the Pastor being accused of being a false prophet very mainstream evangelical in his approach to Christianity. I even came across a video where the guy was saying things like wrong, wrong, wrong in steps to leading someone to Christ. People seem to get hung up on sinners prayer vs. no sinners prayer, should it be believe, repent, have faith or should it be repent, faith, believe or should it be faith, believe, repent.

Really?
I mean come on people. Christ knows the intent and the heart. As a Catholic Christian, it's true that I may share a different approach to coming to Christ than say this sinners prayer and find a good Bible believing Church, but I don't believe that God is going to send anyone to hell that came to Him with a sincere heart trying to live for Him through His Son Jesus Christ. I do believe once someone turns from sin and turns to Christ for their salvation with a contrite heart and continues moving in the right direction that God knows the heart. He knows if one is faking it or truly seeking Him. Yes, as a Catholic, I believe that path goes a certain way to God through Christ, but I also believe we serve a loving merciful God that is not out to send us to hell if we are seeking Him through His Son Jesus Christ the best we now how.

Now, Why Am I Catholic?

Confusion - Although confusion was not in the title, much of what I've shared above about confusion among Christians and all the numerous Churches in the world is why I'm Catholic. I have never come across any other Church that can be as supported by the Bible, by History, by Logic and by it's Teachings as I feel the Catholic Church can be when one opens themselves up to the truth of Catholicism. I have also yet to find a former Catholic that truly KNEW their faith. Going through the motions and understanding/living the Catholic faith are two different things.

The Bible - Yes, the Bible is part of the reason that I am Catholic. Gaining a better understanding of the infallible word of God and the false teaching of sola scriptura which I have seen come to life more than ever in 2018 has changed my Christian walk. Realizing that Christ left us a Church with authority to interpret scripture and Christ didn't leave us with a book when he ascended to heaven has made a key difference in my understanding of the Bible.

History - It's difficult to dive into early Church history with the writings of the Church fathers and not see the Catholic Church wrapped up in those writings. Just like the Bible, it's necessary to view the FULL context. There are times that some of the Church fathers may look like they are saying things that they are not saying when read in full context. So for those who interpret them differently, just like many do the Bible, they can come to a different conclusion like the teachings on the Eucharist. I believe that not only the Bible, but the early Church fathers have the Eucharist correct as the Catholic Church teaches it. In addition, learning more about the Saints who have lived before us has made a difference.

Logic - There are a lot of things that just make logical sense about Catholicism. One of those is that Christ left us with a Church ( ONE ) that has authority to interpret scripture. It's not up to the individual. Yes, individuals can read scripture and should but the conclusions should be in light of the interpretation of the Church. 1 Timothy 3:15 "...the church of the living God, the pillar and bulwark of the truth." The Church is the pillar of truth. Notice, it says CHURCH, not churches. There is no way all the Churches with countless Bible interpretations can be the ONE Church Christ established.

The Teachings - Despite what others get confused about when they say things like "Here's a non-bible teaching of the Catholic Church" which by the way, they often miss just enough to not fully explain the teaching from a Catholic perspective or to see it's biblical foundation, there are many Catholic teachings that have made me a more faithful follower of Christ. For example, confession to a priest is one that some non-Catholics have a problem with and don't see it as Biblical. As a former evangelical of over 40 years, I made my first confession out of obedience to the Catholic Church teaching on it. It was an amazing experience and I'm sold out on confession the Catholic way which is also the Biblical way. The Eucharist ( Holy Communion ) is another key teaching, but there are so may Catholic teachings that just make sense both biblically and logically.

Universal - Like confusion, universal was not in the title, but the church being universal ( what Catholic means ) blows my mind as a former evangelical. My wife and I have attended several different Catholic Churches in our area and outside of our state. The fact that the same scriptures are read and the service flows the same way ( with minor exceptions ) makes us feel at home in any Roman Catholic Church we go to. It's amazing to me and a great joy to have that level of consistency. I think that plays into being ONE and in communion as Christians.

NO RANTS - OK, I have to add NO RANTS. I have heard ZERO negativity come from any homily ( sermon ) out of the pulpit about any other Churches. However, I believe it happens regularly in non-Catholic Churches. You can go online to YouTube and see sermons of preachers not only talking negatively about the Catholic Church but many other Churches. The pulpit is not a place to talk negatively about other churches. And it's sure not a place to talk about incorrect views of Catholic teachings that cause the congregation to see a skewed view of Catholicism.

When I say "I'm Catholic," I'm not separating my Christianity from the fact that I am Catholic. I am a Catholic Christian who loves Jesus Christ. My faith, my hope, my desire, my inner being, my love, my joy, my peace, my comfort all comes through the Father, the Son and the Holy Spirit.

I'm Catholic because I believe it's the one TRUTH established by Christ and the Apostles.

I'm Catholic because I'm tired, actually sick and tired, of private interpretation of scripture and seeing what it has done to Christendom.

I'm Catholic because I believe it's the fullness of the Christian faith.